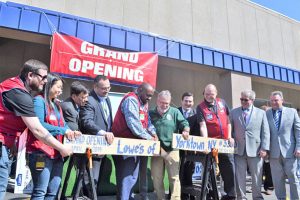 YORKTOWN, N.Y. – On Jan. 26, 2010, the Yorktown Town Board listened to an idea: the development of a Costco Wholesale Club with a gas station at 3220 Crompond Road.

What ensued for the ill-fated project were years of governmental review, hours-long hearings before the Yorktown Planning Board, fierce opposition from neighbors and a lawsuit from competing gas station owners.

Six years later, after clearing nearly all regulatory hurdles, the project was scrapped.

Breslin Realty, the Garden City-based developer that owns the Crompond Road site, acted quickly to replace its prominent tenant with Lowe’s, a home improvement company with more than 2,300 stores nationwide.

Lowe’s, able to piggyback off studies already completed for Costco, was approved by the Planning Board in December 2016, less than one month after the public hearing opened. Shovels were in the ground 10 months later.

Costco protestors, who formed organizations and filled the town’s community center in 2012 with signs and slogans, stayed home this time around, as no public opposition to Lowe’s arose.

Though many spoke of the benefits Lowe’s would bring to Yorktown, financial or otherwise, it was the absence of the fueling station that ultimately made the development so appealing, especially to nearby gas station owners who agreed to drop their legal challenge.

“It was like a needle in a haystack that I found Lowe’s,” Wilbur Breslin, owner of Breslin Realty, said at the store’s groundbreaking in October 2017. The 92-year-old was stung by the failed Costco project, calling it “one of the worst experiences” he had had in nearly 60 years of developing.

Quoting the 1942 film classic, “Casablanca,” Gilbert concluded his speech by saying, “This is the beginning of a beautiful friendship.”

The celebration, in which Lowe’s eschewed a traditional ribbon cutting in favor of a more-apt board cutting, was kicked off by energetic store manager, Pele Edwards. Sounding like a manager or coach speaking to a sports team before a big game, Edwards encouraged his workers to chant loud enough for their competitors to hear.

According to statistics shared by Edwards, who relocated his family from Plainfield, N.J., to Westchester, the Yorktown store created 180 new jobs, the majority of which are full-time positions.

At each new store opening, Edwards said, Lowe’s gives a $2,500 grant to a local organization. The recipient this time around was the Yorktown Central School District.

“It’s so wonderful to have a store such as Lowe’s as part of the Yorktown community,” said Dr. Ron Hattar, superintendent of Yorktown Schools. “I say that not only as the superintendent of schools, but also as a resident of this community for the last 11 years. We’re honored to have you here. You’re wonderful community partners.”

Despite the festive grand opening celebration, many motorists remain frustrated by what they say are out-of-sync traffic lights on Crompond Road between Strang Boulevard and Mohansic Avenue.

Philip Grealy, a Yorktown resident and traffic consultant for Breslin Realty, said that portion of Crompond Road, which has four traffic signals in a quarter-mile stretch, will be significantly improved when the weather warms up, allowing the contractor to repave the road.

While the road is being repaved, workers will install traffic “loops,” enabling the control signals, which are now on fixed timed, to adapt instead to real-time traffic situations, Grealy said.

After the road has been repaved, permanent, painted-on traffic markings will replace existing temporary markings, which are washed away by precipitation and frequent use.