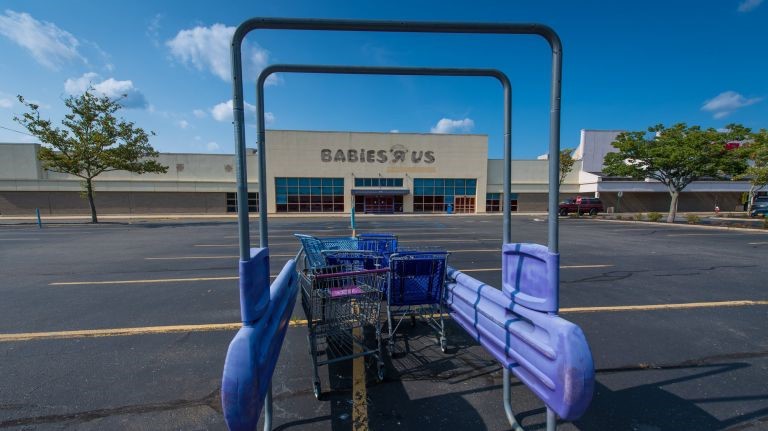 The space vacated by Babies R Us at Sayville Plaza, seen on Wednesday, will soon be occupied by Halloween City and Toy City. Photo Credit: Daniel Goodrich

A Chipotle restaurant, urgent-care clinic and Party City’s new-concept toy store are slated to open in Sayville Plaza this year as the shopping center contends with big-store vacancies — and is in the middle of a lawsuit.

The 371,619-square-foot center on Sunrise Highway has about 110,000 square feet of vacant space because of stores closing after the demise or mergers of their parent companies in the past several years, including a Babies R Us that closed this summer.

“Toy City pop-ups will open in early September 2018 in conjunction with the Halloween City openings and operate through the holiday season, providing customers with an integrated and seamless shopping and checkout experience,” the company said.

The Toy City concept is new, and 50 stores will be launched this year alongside some of the 250 Halloween City stores, a number of which will be in former Toys R Us and Babies R Us stores, Party City said.

In November, the Halloween side of the stores will be condensed and the toy selections will expand.

Also at Sayville Plaza, a 2,300-square-foot space for Chipotle and a 2,400-square-foot space for Northwell Health-GoHealth Urgent Care are being added to a small, freestanding building housing The Vitamin Shoppe, according to Breslin Realty. Garden City-based Breslin oversees leasing for the shopping center and manages the portion of the center owned by Sayville Plaza Development Co. LLC.

The newly built spaces will be turned over to the tenants in September, said Robert Delavale, Breslin’s vice president and director of leasing.

Northwell Health-GoHealth Urgent Care, which has 24 locations on Long Island, plans to open the Sayville Plaza location in the fourth quarter, said a spokesman at New Hyde Park-based Northwell Health, which is a partner in the GoHealth clinics in New York State.

“We want to be in the communities that need us,” he said.

Denver-based Chipotle Mexican Grill Inc. did not return calls or emails for comment.

Kmart has been in Sayville Plaza since 1991 and is located in a building that contains large, vacant spaces formerly occupied by OfficeMax, Borders Books & Music, and Sports Authority.

That section of the shopping center is rundown, but it is beyond the control of Sayville Plaza Development Co., Delavale said.

“Unfortunately, the issue is you’ve got a diamond ring and you’ve got one of the prongs, being Kmart, broken off,” he said.

“Kmart has been successfully running its Sayville location since 1991, we are invested in the property, and continue to upkeep and maintain the store for its many valued customers and members,” Sears said in a statement.

“Any comment from the management company to the contrary is likely motivated by ongoing litigation … brought against Kmart’s parent company,” Sears said.

In September, Sayville Menlo filed a lawsuit against Sears, alleging that the retailer had breached its lease by failing to make $795,000 in repairs to the parking lot, roof, building facades and other areas, according to New York State Supreme Court filings.

Sears made some repairs but found others to be unnecessary, it said in filings.

Through its law firm, Sayville Menlo declined to comment.

Breslin Realty is working to fill the vacant spaces in Sayville Plaza, and it has received interest from national and regional retailers, but marketing the property is difficult with Kmart/Sears controlling a portion of the shopping center, Delavale said.

Retail Roundup is a column about major retail news on Long Island — store openings, closings, expansions, acquisitions, etc. — that is published online and in the Monday paper. To read more of these columns, click here. If you have news to share, please send an email to Newsday reporter Tory N. Parrish at tory.parrish@newsday.com.