The store, which still needs town approvals, would be part of the 322-acre development called The Boulevard, which will include luxury homes, an assisted-living facility and a hotel. 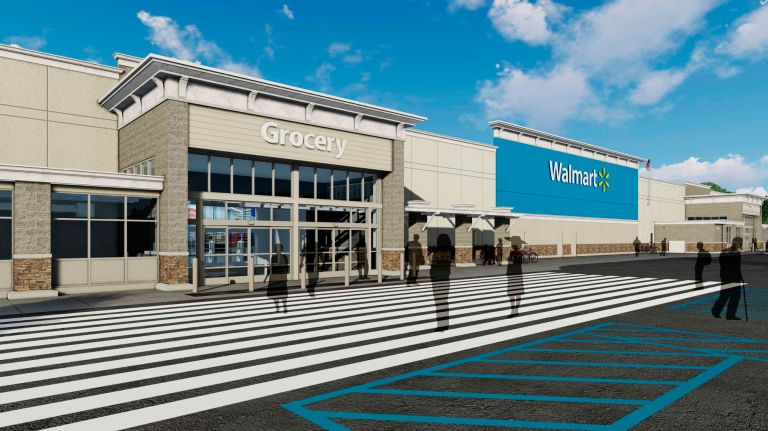 The 197,000-square-foot Walmart Supercenter proposed for Yaphank would be open 24 hours a day and have a full-service grocery store.     Photo Credit: Walmart Inc.

A long-rumored plan to open a Walmart Supercenter in a housing and retail complex slated for the former Parr Meadows horse racing track in Yaphank is moving ahead.

The world’s largest retailer plans to open a supercenter — a large store with a full-service supermarket — in a 322-acre development called The Boulevard, where luxury homes, an assisted-living facility and a hotel are under construction and a retail component is planned.

“This is the smart growth type of development that everyone has been talking about, except this one is actually under construction,” said Brian Ferruggiari, spokesman for AVR Realty Co., the Yonkers-based developer of the project.

On Tuesday, the site’s owner, Rose-Breslin Associates LLC, will submit for approval to the town of Brookhaven a site plan for the 292,568-square-foot retail component, including Walmart as the anchor commercial tenant, Ferruggiari said. The development is located  on William Floyd Parkway, north of the Long Island Expressway at exit 68N.

“Long Island is a market that is a very important one for us in the New York City metro area. … We know this is what customers want from us in terms of what we bring to a community — jobs, low prices, omnichannel convenience,” Keene said.

But on Long Island, the discount retailer ranks below several grocery-selling competitors — Walmart’s Valley Stream location is the only one of its 12 area stores that has a full grocery store.

Among all stores that sold groceries on Long Island last year, including drugstores and warehouse clubs, Walmart ranked eighth, with 4.94 percent of the market, according to a June report from Food Trade News, a Columbia, Maryland-based publication.

Stop & Shop had the largest market share, 21.02 percent, with 51 stores — even before that Quincy, Massachusetts-based chain announced in January that it was buying Bethpage-based King Kullen Co.’s 32 supermarkets and five Wild by Nature natural food stores.

The retailer will be converting its 12-year-old store in Farmingdale to a supercenter — increasing the size by 40 percent to 219,450 square feet — in a 14- to 18-month project that will start in the spring.

As for The Boulevard, formerly called the Meadows at Yaphank, construction on the $450 million project started in 2015. In the development, 935 apartments, townhouses and condos; a 118-bed assisted-living facility called Chelsea Senior Living; and a 146-room Home2 Suites by Hilton hotel are under construction and would connect via roadways, walkways and bike lanes to an area with stores, restaurants and service businesses.

No leases have been signed for smaller retail tenants yet, Ferruggiari said.

The Boulevard is a much smaller version of the large mini-city that Garden City developer Wilbur Breslin proposed for Yaphank in 1989.

The initial proposal, called “Willy World” by opponents, called for a 1.65-million-square-foot mall, up to 12,655 homes, 1.3 million square feet of office and industrial space and a hotel on 2,000 acres stretching from the Long Island Expressway north to Middle Country Road.

The plans were downsized over the years, and Breslin partnered with Allan V. Rose, owner of AVR Realty, on the proposal in 1999.

Brookhaven approved the master plan for the development in 2011.