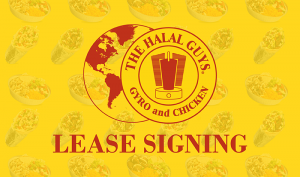 GARDEN CITY, NY (October 9, 2017) – Breslin Realty is proud to announce the signing of a long term lease with The Halal Guys at 901 Broadhollow Rd, Farmingdale NY.

The Halal Guys will be occupying 1,500 square feet in the Republic Plaza shopping center. This will be their first Long Island location.

The Halal Guys is a fast casual restaurant that began as a food cart in New York City in 1990, and has since expanded to almost 50 locations throughout the United States, Canada, and Asia. They serve halal and Middle-Eastern sandwiches & platters such as gyros, chicken, and falafel.

The transaction was arranged and negotiated by Robert Delavale of the Breslin Organization.

Back To Top
Your message has been sent!